SEM: types of electrons, their detection and the information they provide

SEM: types of electrons, their detection and the information they provide

As the name implies, electron microscopes employ an electron beam for imaging. In Fig.1, you can see the various products that are possible as a result of the interaction between electrons and matter. All these different types of signals carry different useful information about the sample and it is the choice of the microscope’s operator which signal to capture.

For example, in transmission electron microscopy (TEM), as the name suggests, signals such as the transmitted electrons are detected which will give information on the sample’s inner structure. In the case of a scanning electron microscope (SEM), two types of signal are typically detected; the backscattered electrons (BSE) and the secondary electrons (SE).

Type of electrons in SEM

Figure 1: Electron — matter interactions: the different types of signals which are generated.

This type of electrons originate from a broad region within the interaction volume. They are a result of elastic collisions of electrons with atoms, which results in a change in the electrons’ trajectory. Think of the electron-atom collision as the so-called “billiard-ball” model, where small particles (electrons) collide with larger particles (atoms). Larger atoms are much stronger scatterers of electrons than light atoms, and therefore produce a higher signal (Fig.2). The number of the backscattered electrons reaching the detector is proportional to their Z number. This dependence of the number of BSE on the atomic number helps us differentiate between different phases, providing imaging that carries information on the sample’s composition. Moreover, BSE images can also provide valuable information on crystallography, topography and the magnetic field of the sample. 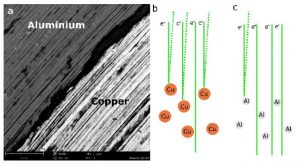 Figure 2: a) SEM image of an Al/Cu sample, b), c) Simplified illustration of the interaction between electron beam with aluminum and copper. Copper atoms (higher Z) scatter more electrons back towards the detector than the lighter aluminum atoms and therefore appear brighter in the SEM image.

The BSE detectors are placed above the sample, concentrically to the electron beam in a “doughnut” arrangement, in order to maximize the collection of the backscattered electrons and they consist of symmetrically divided parts. When all parts are enabled, the contrast of the image depicts the atomic number Z of the element. On the other hand, by enabling only specific quadrants of the detector, topographical information from the image can be retrieved. 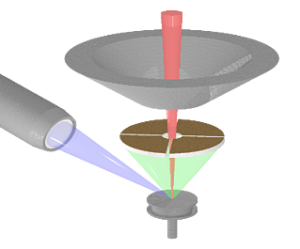 Figure 3: Typical position of the backscattered and secondary electron detectors.

In contrast, secondary electrons originate from the surface or the near-surface regions of the sample. They are a result of inelastic interactions between the primary electron beam and the sample and have lower energy than the backscattered electrons. Secondary electrons are very useful for the inspection of the topography of the sample’s surface, as you can see in Fig. 4:

The Everhart-Thornley detector is the most frequently used device for the detection of SE. It consists of a scintillator inside a Faraday cage, which is positively charged and attracts the SE. The scintillator is then used to accelerate the electrons and convert them into light before reaching a photomultiplier for amplification. The SE detector is placed at the side of the electron chamber, at an angle, in order to increase the efficiency of detecting secondary electrons.

These two types of electrons are the most used signals by SEM users for imaging. Not all SEM users require the same type of information, so the capability of having multiple detectors makes SEM a very versatile tool that can provide valuable solutions for many different applications.

About the author:
Antonis Nanakoudis is Application Engineer at Thermo Fisher Scientific, the world leader in serving science. Antonis is extremely motivated by the capabilities of the Phenom desktop SEM on various applications and is constantly looking to explore the opportunities that it offers for innovative characterisation methods.

For further information, application support, demo or quotation requests  please contact us on 01582 764334 or click here to email.